Except for stable coins, other digital assets are still trading in the red

The overall crypto sector recorded huge losses on Tuesday’s trading session and is still a sea of red at the moment. Almost $300 billion of market capital has been wiped off in the sector in the last 48 hours, with the sector’s combined value dropping from highs of $2.885 trillion on Monday to $2.581 trillion as of writing.

The prices of many cryptocurrencies, including Bitcoin, tanked in what has been a thorough across-the-board plunge. The flagship crypto erased most of its gains from last week as it retreated from its all-time high zone to around $58,700 on Tuesday before clawing its way back and finding stability around the $60,000 mark where it is currently swinging around.

Only Tether and USD Coin traded in the green as of Wednesday 01:45 UTC, according to data from coinmarketcap. 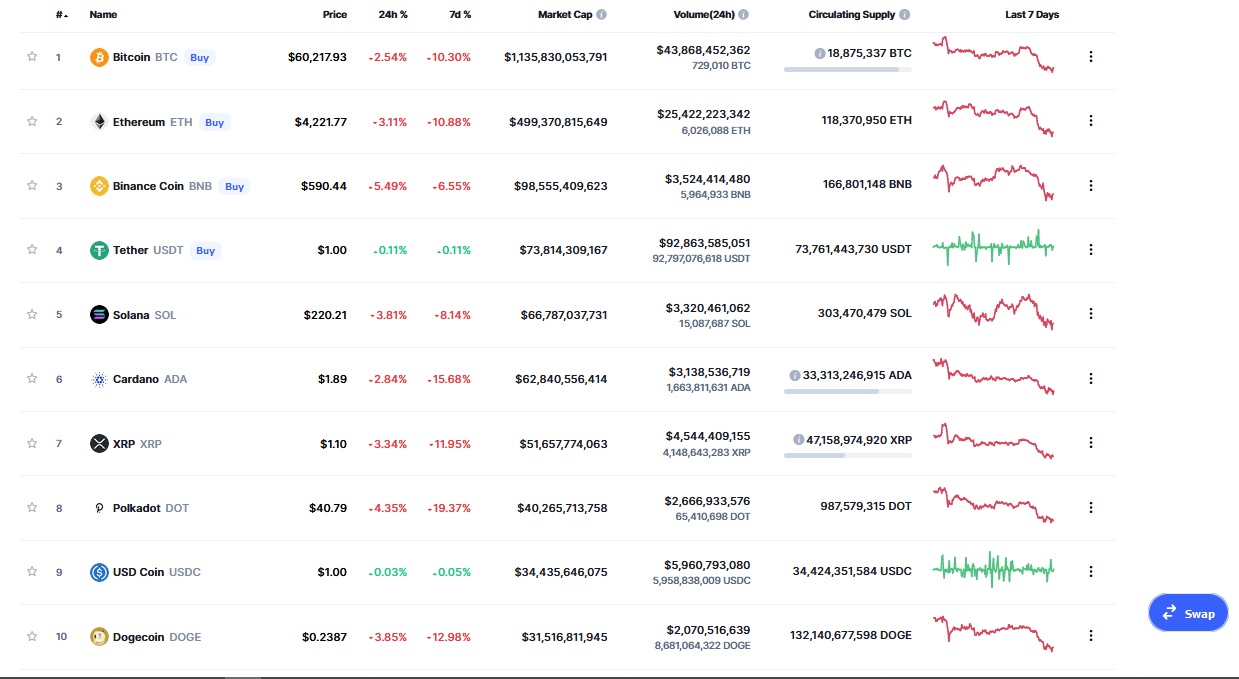 Market performance of the top cryptocurrencies

Polkadot and Dogecoin also carved a similar path. Polkadot posted one of the biggest 7-day changes among the top 10 cryptocurrencies, having shed 9.37% in that period. The picture is no different for the meme cryptocurrency, which is deep in the red with a negative 12.6% change over the same period. The two have lost 4.35% and 3.85%, respectively over the last 24 hours.

Other tokens outside the scope of the top cryptocurrencies are feeling similar losses. Terra, Litecoin, Chainlink, Bitcoin Cash, TRON, and VeChain have all lost between 6% and 10% in the last 24 hours.

What was the reason behind the pullback early on Tuesday?

Crypto analysts haven’t singled out a specific impetus behind the market crash, but the majority agree recent crypto stance in the Chinese crypto landscape massively contributed to the tumble. China’s state planner revealed yesterday that authorities would press on with crackdown efforts as the government seeks to stamp out the mining of digital assets.

The state planner, the National Development and Reform Commission, maintains that crypto mining consumes a lot of energy and causes environmental pollution, and the activity has no significant contribution to the development of the industry. This is the rationale behind the move to curtail the mining of digital assets.

What is next in the market?

Traders don’t seem to be very worried despite the intense selling pressure and the sharp correction that has since ensued. The two leading cryptocurrencies both fell off their highs but confidence in the tokens to bounce back is high. The general consolation is that the plunge wasn’t token-specific but rather swept across the whole market.

Besides, many crypto holders understand the volatile nature of the crypto sector and, as such, aren’t shocked about the recent price movements. They contend that the latest dip is a breather rather than a prolonged sell-off, with some considering it an entry point into the market. Traders have generally resorted to the cautious wait-and-see approach before making their next move. It remains to be seen how the sector will perform for the rest of the week and whether or not the tokens will shake off the losses soon.

Robinhood CEO: DOGE can become the ‘currency of the internet’

Bitcoin is still the king of crypto: Anthony Pompliano