These Two DApps On Tron Are Looking Quite Popular: How Far Can They Go?

The blockchain ecosystem has seen a lot of innovations in recent years. But the development of Decentralised Apps or dApps is worth checking out. Most DAapps are typically launched on major chains like BSC, Ethereum, and Solana.

But other chains are stepping up too, and Tron is one of them. Here are some reasons why Tron is killing it:

While there are several DApps on the Tron Network, here are two of the most popular right now: 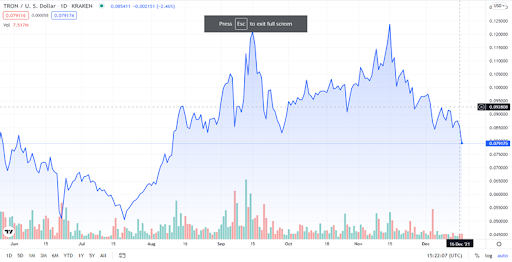 JustLend, as you can see from the name, is a peer-to-peer lending protocol on Tron. The platform also gives users the chance to earn sizeable APYs in several ways. You can also earn rewards by mining liquidity through the native protocol token JST.

JustLend runs on a fully decentralized Autonomous Organization or DAO where holders of the JST coin get to vote on changes on the protocol. So far, JST has a market cap of around USD 423 Million.

SunSwap – The First DEX on Tron

Like dApps, DEXs or decentralized exchanges have also grown hot in recent months. While we have seen a lot of DEX on major chains like Ethereum, it’s now the first time we are seeing such a platform on Tron. SunSwap works more or less like UniSwap or PancakeSwap, but since it’s on the Tron Network, gas fees are low and speed quite good.

The DEX has also allowed investors to earn rewards by providing liquidity on the platform. In fact, at the time of publishing this post, there was over USD 754 Million worth of staked assets here. This shows you just how popular the dApp is.

2 big cryptocurrencies to worry about after LUNA crash

Three cryptos that could do well during the Ethereum merge week