Solana defies the latest hack to shoot 11% but is the token now bullish?

Solana SOL/USD has often been touted as a worthy competitor of Ethereum. Its low transaction costs and high speeds have seen the blockchain labeled an Ethereum killer. Nonetheless, Solana has faced mounting challenges owing to frequent exploits.

Barely a week ago, Solana wallets were hacked, with about 8,000 of them targeted. The Phantom, TrustWallet, and Slope users were all affected. The hack pushed the SOL token to trade lower. On August 9, Phantom said its systems were uncompromised in the hack. The latest hack is just one of many that have exposed the vulnerability of Solana. While the blockchain is touted to grow exponentially, the hacks could hurt its credibility.

Wednesday’s inflation data came positive for most cryptocurrencies. Solana token was one of them as it staged recoveries. As of press time, the token was trading up by 11% in the last 24 hours. That illustrates that investors remain optimistic about recoveries. But is SOL now bullish?

SOL eyes a breakout of the resistance after the latest gains 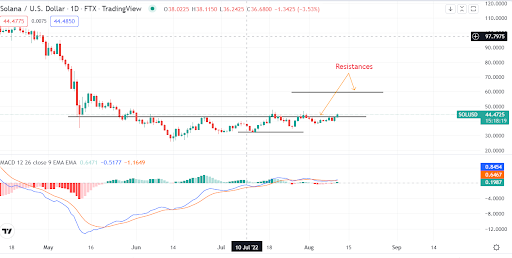 Technically, SOL is trading at the $43 resistance zone. A MACD crossover could suggest that the cryptocurrency is entering the bull territory.

At the current price, two scenarios are likely. The first is a break above the $43 resistance. That will be confirmed by the close of the daily candle. If SOL successfully clears $43, that will set it to the next resistance at $60. Alternatively, SOL could slip back to the consolidation zone. In that case, the bull case will be invalidated.

SOL is bullish, but we need to wait for a break above $43. The cryptocurrency could also slip back to the consolidation zone if a breakout fails.

Why Enjin coin beats Axie Infinity in the short term

5 Best Cryptocurrency Apps for Beginners in 2022