Missed out on Ethereum? These smart contract platforms are promising outstanding growth

Ethereum is the biggest smart contract platform right now. It has dominated the industry, and it will still be a huge player in the long term. But a few other platforms are starting to offer good competition and could be great investments for the future. Smart contract platforms are typically used to develop and deploy decentralised applications (DApps). It’s one of the most important sectors in the blockchain world, and it’s growing fast. Check this out:

For investors keen on taking advantage of the growth of the smart contracts industry, here are some interesting projects you can consider other than Ethereum, of course.

Cosmos (ATOM) calls itself the internet of blockchains. True to that, it’s actually an ever-expanding ecosystem that features a variety of highly interconnected decentralised apps. The platform has over $172 billion worth of digital assets under management. 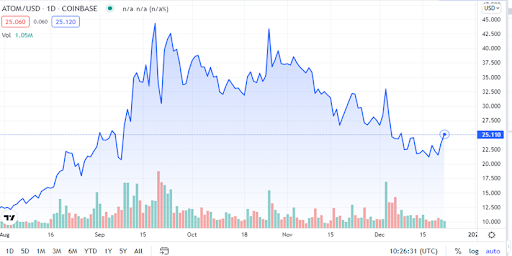 There is also an in-built decentralised exchange and other services. ATOM is the native governance token on Cosmos. The token is also used to distribute rewards and pay stakers. At press time, it was trading at $25.02 with a market cap of $5.6 Billion.

Like Cosmos, Algorand (ALGO) is also an ecosystem of interconnected decentralised apps that touts itself as the future of finance. The platform offers layer-2 smart contracts with full cross-chain interoperability. It’s also an open-source chain.

ALGO is the native governance and transaction token for the platform. At the time of publishing, it was valued at $1.37 with a market cap of $8.6 billion.

Lido price prediction: Here’s why the LDO token is rising