IOTA (MIOTA) is 61% down from this year’s all-time highs – Should you buy the dip?

IOTA (MIOTA) has in recent weeks remained one of the strugglers in the crypto market. The coin is in fact 61% lower than its all-time highs this year. Overall market cap is also sliding. At the time of publishing this post, IOTA (MIOTA) was trading at $1.04, a nearly 5.4% intraday drop and one of the lowest we have seen since October. So, is it time to buy the dip? Here are some facts first: 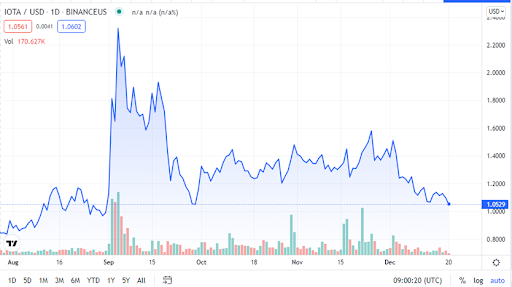 Based on what we have seen so far, it’s safe to conclude that overall sentiment around IOTA (MIOTA) is bearish at best. Right now, the two-month upward resistance is around $1.18. Any upside breakout will need to overcome this. The coin has also seen wild swings in prices.

For instance. after hitting a two-month high of $1.66 in late November, IOTA (MIOTA) retreated almost instantly, losing nearly 38% in less than 3 weeks. Although much of this can be attributed to the wider sell-off in crypto, there is still a lot of bear pressure on the coin.

Is it the right time to buy into the IOTA (MIOTA) dip?

Well, not right now. In case you are thinking of holding IOTA (MIOTA) for short-term speculative trades, then that could work since we expect a lot of volatility around the coin before the year is out. But with the bear pressure and the trend pointing downwards, there is still a lot of downside risk to get into IOTA (MIOTA) in the long haul now.

Ripple’s XRP rallies 10% after another win. Is the token now bullish?