ICP volumes even as the broader market turns bullish

Internet Computer (ICP/USD) has been on an uptrend for the last 48-hours. This is pretty much in line with the broader market, which has been in the green since Bitcoin bounced off lows of $32,800.

However, unlike most major cryptocurrencies, ICP’s rebound has not been strong. For most of the last 48-hours, ICP has been range-bound below the 23.6% Fibonacci resistance at $21.18.

Internet Computer yet to gain traction

With the Internet Computer, blockchain finally becomes what it was always meant to be – an open and distributed medium for applications. The revolutionary design unlocking smart contracts’ full potential proves that this technology has so much more in store than just financial transactions or storing data securely. Internet Computer aims to create entire decentralised economies.

While it has a powerful value proposition, Internet Computer has not had the best of runs since it launched. Issues touching on its decentralisation came up a few months after it launched. What followed was a value collapse from over $400 to under $30.

Internet Computer is currently trading at $21.64 and has been gaining for the past 48-hours. This is in-line with the price action in the broader cryptocurrency market. 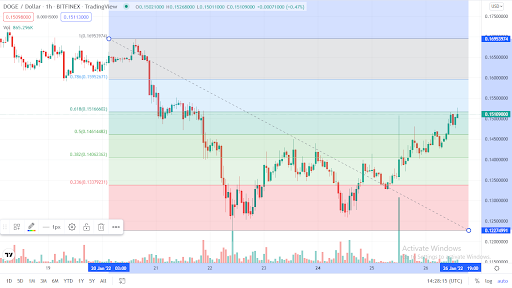 On the 1-hour chart, ICP has been gaining momentum for the last 48-hours. However, for most of that time, volumes have been low, and ICP has been consolidating below the 23.6% Fibonacci resistance at $21.18.

It is only in the last 6-hours that it has managed to push through the 23.6% Fibonacci resistance, but volumes are low. If volumes remain low, there is a risk that ICP could fall back below the $21.18 price level. In such a case, ICP could easily dip below $20.

However, if the broader market remains strongly bullish, ICP could not only hold above $21.18, but also possibly break the 38.2% Fibonacci resistance at $23.15. In such a case, ICP could easily trade above $25 in the course of the week.

Crypto Gains Flattens But These Altcoins Are Set to Cool Off