Dogecoin DOGE/USD has stabilised over the past 24-hours, after Friday’s market correction. It is currently trading at $0.20.

Dogecoin started off as a joke meant to satirise the explosion to crypto tokens in the 2010s.

While it remained a joke coin for years, the community kept getting bigger. The turning point for Dogecoin came in 2020 after Elon Musk started tweeting about it.

Since then, Dogecoin’s profile has improved a great deal. Its price pumped by 12,000% by April this year. While it had a sharp correction from its peak of $0.73, anyone who bought Dogecoin last year is still in the money.

However, going into 2022, there is still a chance for Dogecoin to do another parabolic price rally. This is due to the upcoming Doge-1 space mission that is scheduled for Q1 of 2022.

Elon Musk announced this mission at Dogecoin’s price peak earlier in the year. The mission aims to explore the use of cryptocurrencies in interplanetary commerce and is funded in Dogecoin.

The Doge-1 mission is likely to attract a lot of media hype around Dogecoin. This, coupled with Elon Musk’s price-moving tweets, could see Dogecoin test prices above $1 within the first three months of 2022.

Dogecoin has been in a correction since late October when it pumped to $0.339. The selloff has accelerated since that time, and on Friday, Dogecoin hit a low of $0.1862. If selling volumes remain as high as they are at the moment, Dogecoin could close November below $0.18. 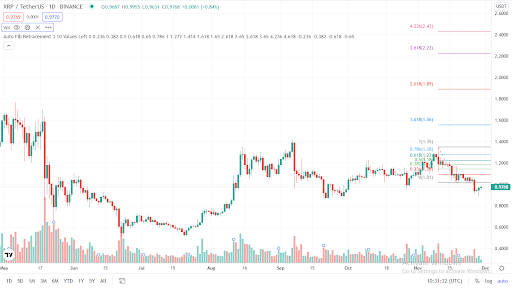 Dogecoin is a meme coin that has been given life by Elon Musk’s positive tweets. However, the hype around it has been in decline since May. With the crypto market turning bearish over the past week, Doge is likely to close this month below $0.18.

Is it time to sell Ethereum despite the recent rally?