Cosmos (ATOM) remains resilient during the crypto slump – Should you buy it?

Cosmos (ATOM) has shown some incredible resilience even as the broader crypto market reported weakness in January. The coin in fact has traded very close to its all-time highs albeit is it is a bit lower. With this price action, should you buy Cosmos (ATOM)? Here are some highlights first: 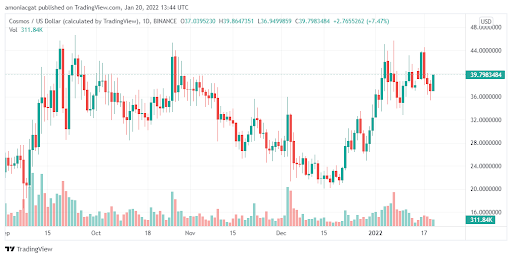 For the most part of January, a lot of Altcoins in the market has seen massive routs. But it seems Cosmos (ATOM) has managed to hold steady. Despite taking a few hits, the token has rebounded. It is still about 3% down in 7 days but remains 7% higher in 24-hour intraday trading.

At the time of writing this post, Cosmos (ATOM) was trading at around $39. It is quite close to its all-time high of $46. Although we don’t expect it to retest those heights in the coming days, Cosmos (ATOM) is likely to consolidate around the $40 mark. Also, the token has surged past its 25- and 50-day moving averages, suggesting that a bullish alignment is well and truly in the mix.

Should you buy Cosmos (ATOM)

Cosmos (ATOM) is one of the most popular altcoins. The chain also looks to offer one of the fastest and low-cost blockchains in the world for innovative developers. It has been a hit among investors, ranking among the top 10 by market cap.

Based on those fundamentals, it is a decent token to get your hands on. The recent price action also shows it can be resilient even if broader headwinds hold back crypto assets.

Does Solana’s token SOL have a bullish case after recent gains?