Celsius CEL/USD is a financial services platform that provides users with regular payouts and interest on their holdings. The CE token performs many different functions, such as boosting user profits! The Celsius team promises more than just the typical banking experience by allowing users to earn extra money every month for holding cryptocurrency.

A while back, Celsius Network announced that they have raised $400 million in funding. The protocol also noted this was led by Canada’s second-largest pension fund, Caisse de dépôt et placement du Québec (CDPQ), alongside an equity firm established by a former Airbnb executive known as WestCap.

Celsius plans on using the $400 million fund to continue expanding its product offerings. Chief among these is investing in institutional-grade products and doubling their employee numbers from the current 468 to almost 1000 to support this venture.

Celsius Network’s valuation was initially valued at only 150 million but with this new influx of cash, it now sits close to $3 billion -an impressive number that could prove lucrative for investors.

It hit an all-time high in June at $8.05 but has since been in decline. However, over the past month, it seems to have hit the bottom, and buyers are re-entering the market.  This is confirmed by on-chain metrics for this cryptocurrency.

Data from IntoTheBlock indicates that CEL saw $72.21 million in transactions greater than $100K within the last seven days. It also had a total exchange inflow of  $1.73 million within seven days.

Celsius Network has been in a persistent bear market over the last 6-months. However, bears lost momentum in November, an indicator that CEL could be getting oversold. For a bullish reversal to be confirmed, Celsius needs to push through the $4.95 resistance and with high volumes. 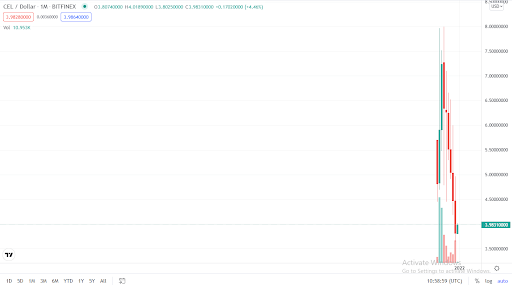 If this fails, and October’s low of $3.65 is breached, the selloff could continue all the way into 2022. However, based on Celsius’ strong fundamentals, this could be the bottom.

Stellar Lumens makes a bullish statement. Why do you need to watch the token?

Why is AAVE rallying by more than 15% today?