Cardano (ADA) downtrend still in force – but a rally is likely if coin breaks $1.5 in the near term

Since September this year, Cardano (ADA) has been sliding and sliding. The downtrend appears to be well in force as of now. But some bulls are seeing a potential rally. However, the coin will need to beak the $1.5 resistance. While there is no consensus as to when such a breakout could come, optimistic estimates expect a bullish run heading into Christmas. Here is what we know so far: 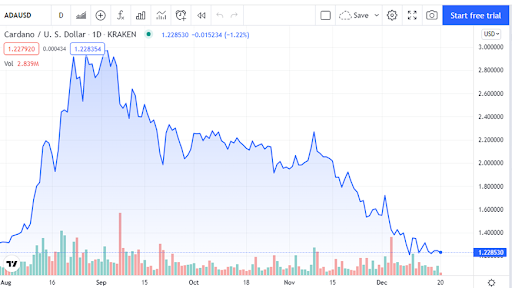 As noted above, the downtrend on Cardano (ADA) has been quite persistent over the last three months or so. As we speak, the coin has lost nearly 63% in value during that period, reflecting a bearish sentiment all through. The slump however is opening up doors for value investors to jump and buy the dip.

As of now, the fair value, where we may see intense buying activity, is at $1. At the time of reporting, the coin was already trading at $1.23. Although this does not indicate a trend reversal, it suggests that bull or buying activity may have intensified a bit. As a result, a possible breakout could be on, with conservative estimates putting ADA at $1.8 before the end of the year.

Should you buy Cardano (ADA) now?

Risk-off sentiment in the market appeared to have abated in recent weeks. But there are still serious concerns surrounding slowed global economic growth due to Omicron. However, in the short term, Cardano (ADA) offers a bit of upside. But how far the bullish momentum holds is really very hard to tell. In that case, it’s more of a short-term play than a long bet.

Off to a Good Start: Crypto Market Awakening on Sustained Retail Stack Up

Solana vs Avalanche: Which is a better buy between SOL and AVAX?