Bitcoin (BTC/USD) is in a rebound after making a V-shaped recovery at $32800 on January 24, 2022. Buying volumes have been rising as Bitcoin continues to price in the potential interest rates hike in the U.S, which has been the key reason behind its recent decline.

Bitcoin is the first decentralised digital currency that allows people to transfer money without relying on third-party intermediaries like banks, credit card companies, and so on. Think of it as an electronic form of cash, and you can send Bitcoin from one person’s wallet (a phone app or online account) directly into another individual’s spending portal just by knowing their address.

Over the past year, Bitcoin has attracted a lot of institutional investors, a factor that played a role in its recent rally to $69k. Besides hedge funds and other institutionalised investors, individual corporations have also added Bitcoin to their balance sheets. Some of the more notable ones are Tesla and Microstrategy.

According to Cathie Wood of Ark Invest, if all S&P 500 companies apportion just 5% of their balance sheets to Bitcoin, BTC could be worth upwards of $500k within the decade.

Bitcoin remains highly volatile in the short term, though. At the moment, it is bouncing off a key support level. Investors were fearful that if it had kept going lower and breached $30k, BTC could easily have fallen below $20k. 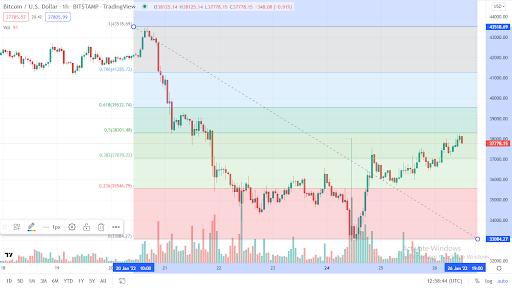 What is making Avalanche’s AVAX price rise as majority of cryptocurrencies dip?