Avalanche (AVAX/USD) has been in the green for the past 24-hours. This is after it made a V-shaped recovery at $52.92 on January 24, 2022. AVAX recovery is in tandem with the broader cryptocurrency market, which has been on the rise for the last 48-hours.

Avalanche is one of the most scalable and low-cost smart contracts platforms in the market today.

Imagine a world where you can launch Ethereum Dapps, and they confirm transactions instantly. You don’t have to wait minutes for your smart contract code before it’s time to go live – that’s the kind of power that Avalanche gives Dapps developers.

Unlike some of the other Ethereum competitors, Avalanche is decentralised and is likely to remain so as the network gets bigger. That’s because anyone can run a node since you don’t need any complicated hardware to run an Avalanche node.

Avalanche is also quite flexible, which makes it perfect for all kinds of Dapps. With Avalanche, developers and blockchain experts can build their own virtual machines to run any applications. This is a powerful tool and puts Avalanche at the forefront of adoption in the fast-expanding Web 3.0 space.

Despite all these capabilities, Avalanche’s price is still heavily determined by Bitcoin and the broader cryptocurrency market. In the last two days, AVAX’s price has bounced back, just like the rest of the market. 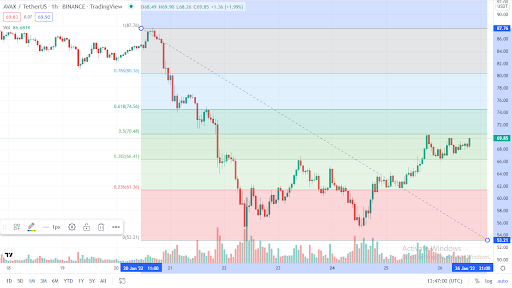 On the 1-hour chart, Avalanche is on an uptrend with the 38.2% Fibonacci, offering strong support at $66.27. However, for the uptrend to be sustainable, AVAX needs to break the 50.0% Fibonacci resistance at $70.31.

Failure at $70.31 could lead to consolidation or a continuation of the bear trend that started earlier in the year.

Bitcoin versus Ethereum: Which one should you buy when the bull market returns