Are We Seeing an Axie Infinity Correction? What To Expect as An Investor?

About a week ago, there was a lot of bearish commentary around Axie Infinity (AXS). At the time, analysts were predicting nearly 31% in downside risk after the chart appeared to enter a bearish pattern. In fact, estimates were looking at a massive correction that would send AXS to around $65.96. Here is how things looked: 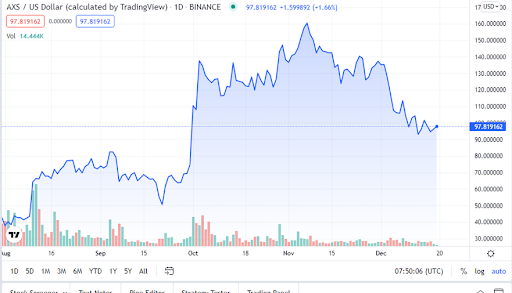 Is the Correction Still a Possibility – Price Action and Analysis

The simple answer here is yes. Downside risks are still very serious, and Axie Infinity could still decline to around $65. The key support right now is at $95.25, which we are watching closely. AXS did drop lower than the support level but it managed to bounce back.

However, it’s still dangerously close, and considering the headwinds we have seen in the market of late, it won’t be a surprise if in the coming days AXS declines below the $95.24 mark.

But The coin could still have a bull run of sorts albeit it seems a bit unlikely. For this to happen, bulls need to test the upper resistance of $105.3 and sustain it for some time.

Should You Buy Axie Infinity Now?

Although AXS is not in a downtrend right now, there is enough evidence to suggest that a dip is well and truly on the cards. It would be best to wait at least a few days to see how the price action develops. If indeed the coin pushes below its $95 support, then chances are a dip-buying opportunity will arise very soon.

Ankr interview – what the team think of MetaMask & Infura restrictions